The Concept of Negative Entropy

The research of Wilhelm Reich was a gigantic step towards our scientific understanding of the characteristics of life force & life energy.

This is so because Wilhelm Reich was the first scientist who recognized that life force, or orgone (as he called it) follows the principle of negative entropy.

To understand this principle, let's first explain what we mean with entropy.
Entropy is a term that appears in physics.
Physicists observed that two energy systems of different potentials end up with the same potential some time after they came in contact with each other.
We call this process of establishing balance entropy.

For instance, if you bring a hot object in contact with a cold object, both objects will have the same temperature after some time.
One object will be colder, while the other object will be warmer.
The energy that the physicist refers to is electromagnetic in nature, of course.
The average academic physicist of our days is still hostile to the concept of life energy.

Life force operates the opposite way.

An orgone accumulator is a box that has alternating layers of organic and metallic materials.
The outermost layer is organic while the innermost layer is metallic.
As a consequence there will be a flow of orgone energy from the outside of the orgone box to the inside.

The life force inside the accumulator will become stronger and stronger.
A thermometer on the inside of the orgone box shows consistently a higher temperature.
This fact contradicts the law of entropy.

According to the second law of thermodynamics the inside of the box should have the same temperature as the outside.

Wilhelm Reich has also made another important observation:
An electroscope discharges much faster in an atmosphere that has a high orgone potential.

This characteristic allowed Reich to measure the strength of fields of life energy.
If we consider this characteristic of life force and the fact that the inside of an orgone box is warmer than its surroundings, we must realize that there is an "interface" between the space time that physics describes and life energy. 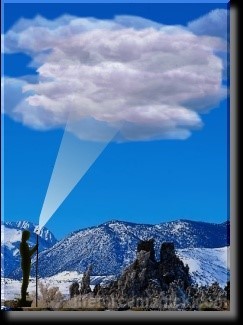 Wilhelm Reich was a medical doctor. Therefore he used orgone energy for healing purposes.
This brought traditionalists on the plan with the usual consequences.

Reich went on to use his discoveries to build devices that he called "cloud busters."
He used these devices to influence theweather: by forming clouds and by destroying them.

Reich also discovered a variation of orgone that was stagnant. He called this energy deadly orgone, or DOR. He used cloudbusters to remove clouds of DOR that are hostile to life.

For nearly 40 years after Reich's passing virtually nothing happened in the science of orgone physics.

Magicians such as Israel Regardie realized that a knowledge of orgone physics is useful for the study of magic.
He recommends the study of Reich's works in the introduction to his manual of the Golden Dawn system.
He had the right insights, but, being a traditionalist, he was incapable of accepting the consequences and freeing himself from the traditions he grew up in.

Most of the people that followed Reich remained satisfied in conducting cloud busting experiments and building orgone accumulators.
They overlooked that Reich's genius opened up a vast field of new technologies.


^ The Concept of Negative Entropy

More powerful?
Yes, things get happening, but not exactly as I wished. Do I need another, but powerful one? Which one you recommend? And yes, with the PBT 2400 I felt increased energy.
Olle (Göteborg, Sverige / Sweden)